During our 4th Annual Power of a Promise event, we presented six special awards recognizing individuals and organizations that have gone above and beyond in their dedication and contribution to Komen St. Louis and the local fight against breast cancer. 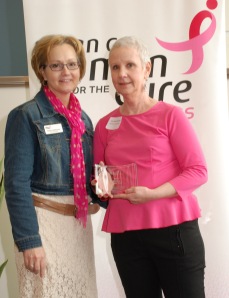 It was an honor to recognize an outstanding breast cancer survivor who exemplifies caring, compassion and devotion to helping others in their journey to survive breast cancer.

We can always count on Lisa Oxenhandler to help with Komen St. Louis events throughout the year. She consistently shows up with a smile on her face. She’s always willing to go the extra mile to get the work done. She is a joy to work with, and we are so grateful to have her support.

Lisa Oxenhandler, our 2013 Survivor of the Year, is an inspiration to so many other breast cancer survivors.

Congratulations and thank you, Lisa!

At Komen St. Louis, we could not function without our volunteers. We appreciate all who devote their time and passion to the fight against breast cancer. 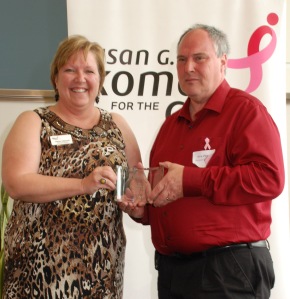 It was a pleasure to begin National Volunteer Week by recognizing one of our outstanding volunteers, during our 4th Annual Power of a Promise event.

Jerry Clippard is someone we can always count on to step up whenever help is needed. He volunteers for every single Komen St. Louis event throughout the year. He is a tireless worker who consistently goes above and beyond the call of duty. He makes such a positive impact on our organization.

We are so grateful for his dedication to Komen St. Louis and to our community.

Since pulling the first baguette from its stone oven in 1993, Companion Bakery has formed a reputation for doing things right. And St. Louisans know it, making Companion a popular gathering place for customers to pop in or linger, to sit quietly or share in conversations and a meal.

With a spirit of community in mind, there was no hesitation from Siena Cargas, Companion Bakery’s Director of Catering and Special Events, to sign up both area locations for Komen St. Louis’ 5th Annual Dine Out for the Cure, taking place on Thursday, June 13. 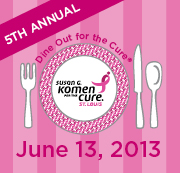 “Breast cancer has hit too close to home for almost everyone we know,” says Siena. “This is a small way we can all be active in the cause personally and as a team. It is so simple to participate, and the donation can be significant without hurting the pocketbook.”

Companion Bakery has participated in Dine Out for the Cure since the event began in 2009. The employees and owners are compassionate about supporting local nonprofits like Komen St. Louis, and they have found unique ways to enhance the experience.

“On that day in June, everyone wear pink ribbons and we give out the Komen stickers to our customers,” says Siena. “We have pink ribbon cookies for sale in the cafes and we donate a portion of the cookies’ proceeds back to the cause, too.”

Thanks to Companion Bakery and other participating restaurants across the St. Louis metro area, Komen St. Louis’ Dine Out for the Cure has raised more than $365,000 for the local fight against breast cancer. Dine Out allows members of our community to take action  against the disease just by dining out for breakfast, lunch and/or dinner on June 13. Restaurants participating in Dine Out agree to donate 20%, 35% or 50% of the day’s proceeds to Komen St. Louis in support of local breast health/breast cancer programs and breast cancer research.

“Community is one of the 4 ‘C’s that make up Companion – Customers, Company, Community, Companions,” says Siena. “We all appreciate being involved.”

We’re recruiting restaurants now to participate in our 5th Annual Dine Out for the Cure on Thursday, June 13. Learn more about Dine Out. 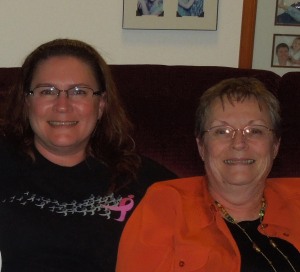 I began my Komen involvement by walking in the 2nd Annual Susan G. Komen St. Louis Race for the Cure. I knew I had personal family history with breast cancer. My maternal grandmother passed away due to breast cancer in her 80s, and both my maternal aunts were diagnosed in their 60s and are survivors.

In 2001, I discovered that a dear co-worker, Bonnie, was a breast cancer survivor and walked each year with friends, so I formed a Komen St. Louis Race team in her honor. It made me feel great to celebrate her survival and help raise money to give others a chance to survive. But I wanted to do more.

In 2006, I contacted the Komen St. Louis office and offered to help with the website. I became a volunteer on the Website Committee right away.

When I mentioned to people that I was volunteering for Komen St. Louis, they would open up about their own experiences. I found out that many friends, neighbors and co-workers had battled breast cancer. And then I lost some to the battle. This made me want to continue offering my skills, to help make sure the Race would go on and raise as much money as possible.

I was then personally touched by what Komen St. Louis grants can do.

One day, I received a call from my mother, who told me my sister, Karen, went to a well-woman exam where they found a lump in her breast. Karen had no insurance and did not know how she would pay for a mammogram. I immediately called the Komen St. Louis office, and within hours I had the name and number of a woman who set up an appointment for the next day for my sister to have her mammogram, fully funded by a Komen St. Louis grant. The lump turned out to be nothing to worry about. I was told if Karen had needed further treatment, her visits and care would have continued to be paid for with Komen St. Louis grant money.

I learned exactly where my donations had been going and I knew my Race team’s fundraising efforts helped pay for her mammogram! I had a great sense of satisfaction in what I was doing and a need to continue to help.

This past year, my mother called to tell me her mammogram showed an abnormality. There were ultrasounds, biopsies, and appointment after appointment. She opted for lumpectomy, followed by chemotherapy and radiation. Her chance of survival is more than 90 percent. I am my mother’s medical advisor, since my father had passed away a few months earlier, and I have been with her every step of the way. Now it is personal. My own risk has increased. It was horrible watching someone go through this process…all for a cancer that was the size of a pea.

I have always wanted to do something for my community. Contacting Komen St. Louis was the best idea I ever had. I don’t have a wealth of money to give, but I do have time and skills with software, web design and databases. I have met wonderful, caring people in all the Komen St. Louis activities in which I have had the privilege to participate. I will continue to give all I can to Komen St. Louis as long as I am needed!

My hope is that by the time my daughter is in her 40s, and her risk increases, we’ll have a cure. I know we will find the cures!

Komen Missouri is blogging about